The cyber generation loves keeping everything on its fingers. One tap and it is all done! Gone are the days when we were sitting at the corner planning for things to be done, be it visiting bank, transferring money or even getting grocery. The worry not attitude of this generation is a gift which has been cascaded to us with the advancement of technology.

The mushrooming of technology has brought out a tremendous growth in the sector of Mobile App Development. According to Data from App Annie, An average smart phone owner spends 2 hours and 15 minutes a day using apps – the equivalent of one month a year. The average person has 60-90 apps installed on their phone, using around 30 of them each month and launching 9 per day.

As of the quarter of 2018, Android users have the privilege to choose between 2.1 million apps. Compared to Apple’s App Store which is the second-largest app store with almost 2 million available apps

If we just look at the number of mobile App downloads, the number is astonishing! 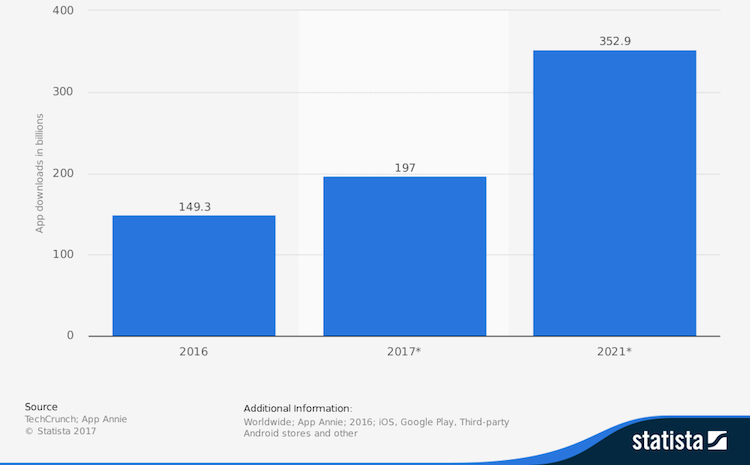 These figures not only inform us about the usage of Mobile Apps but also indicate about its flourishing market. As the market for Mobile App is growing, so is the demand to upgrade the App with newer technology. It is important that the mobile app is adorned with features like great user interface, compatible with mobile platform and a feature that provides it a status to stand out of the crowd.

The app market needs newer technologies and an up gradation to fight obsoleteness and fulfill the ever growing demands of the consumer. Here is what one can do to sustain in the Mobile App market.

With the emergence of AMP and EMP, the users have experienced Higher Performance and Engagement. With around 25 million domains, 100+ technology providers AMP and EMP has promised reliable performance and fast rendering of Google pages.

The impressive growth of Machine learning and Artificial Intelligence has brought out a revolutionary change in Mobile App Development. With the integration of AI and ML in artificial Apps, users have been benefited with technologies like Voice recognition and face recognition in the past. Machine learning and Artificial Intelligence are heading towards becoming the face of future developments in Mobile App Development. The future of 5G phones will hugely be an outcome of ML And AI.

Instant apps have found their spotlight in Play store and is said to gain more ground in 2019. Owing to their safe and speedy nature, they have earned a lot of appreciation in the market. An Instant App allows the user to have a lot of free space unlike other apps which require downloading to be done.

Since its inception with Apple in 2013, Beacons Technology has come a long way. Beacons have proved to be one of the advance ways to help navigate favorite destinations and broadcast places where the interest of user is inclined. With up gradation of Smart phones, this technology is sure to stay and extend the long-term return on smart building investment

First used by bitcoin in 2018, Blockchain technology is now said to be the next big thing in the future of Mobile Apps. Blockchain technology has the ability to decrease the raging security issues in mobile payments and online purchases. 2019 will see use of Smart contracts, digital contracts that will help people using Blockchain for their digital transactions. Once the smart contracts are uploaded to block chain, they can’t be changed and will allow transparency to all the involved parties. With Block chain technology, users will get this assurance that businesses handling the transactions are trustworthy.

The demand to introduce chat bots for Mobile App is spreading like fire. With the integration of Chatbots in Mobile App there will be a significant depletion in the number of app as the entire information could be assembled into one single app that is using a modern Chatbot. Chatbots are definitely winning hearts with their speed of handling human queries and friendly customer engagement.

The existence of mobile applications has become an innate part of digital technology. There is a dire need to make sure that the skills are in proper alignment with technological advancement. To make sure that one does not lag behind in this competitive race, it is important that businesses are up to date with the ongoing trends.